Maria Montessori Did Not Use a Leash

Last week I finally emptied my iPhone of its photo contents, making more room for songs and videos. As I scroll through the photos I have taken in just the last five days, I am kind of stunned at the schizophrenia-ness of it all. Here, let me explain: 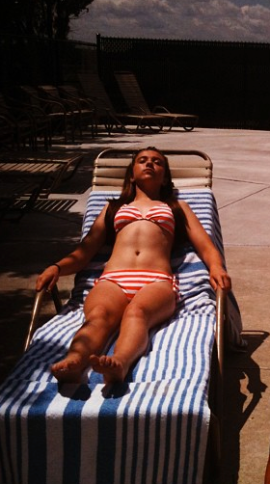 Lizzie texted a photo of herself “getting her tan on,” while I was knee deep in exam week at East (a week so full of raging mom hormones that I will need much time to reflect and rejuvenate from it). This photo, first of all, made me happy because in all of its nothingness is a message to me that my daughter is having a better life than I ever did or will. It also made me severely depressed. I texted the photo (the whole image displays her next to her bikini clad Syd) to my Susie and wrote, “Isn’t this supposed to be us?”

Next photo in queue is the of Noel’s wedding invites, which I made for her as a wedding gift of sorts (and because she asked me and because I wanted to): 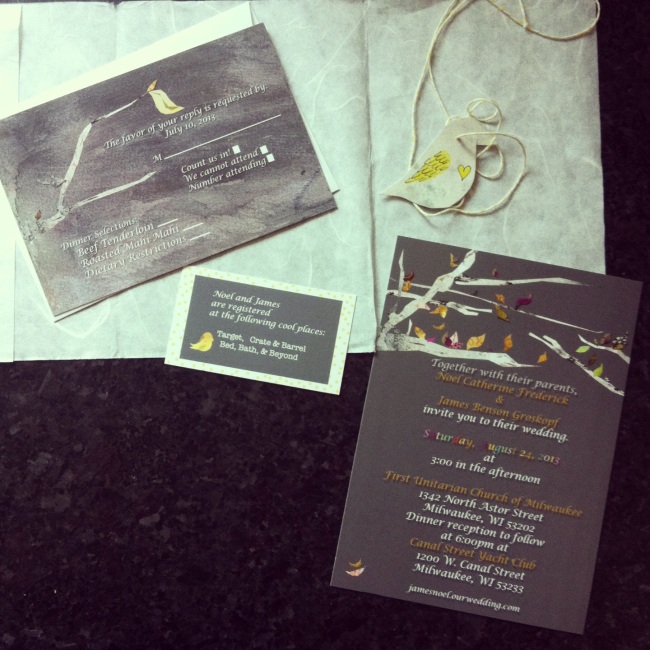 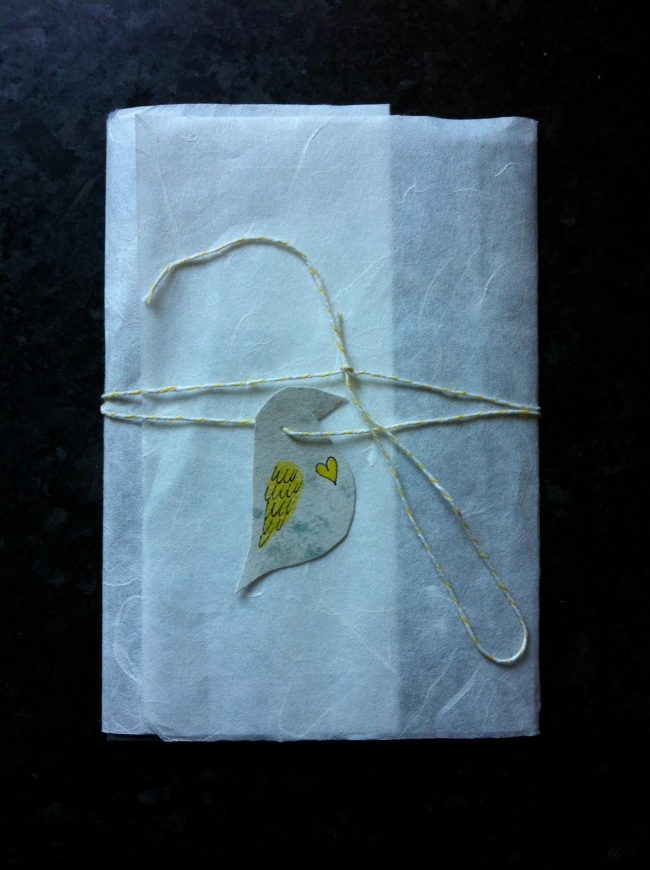 I was excited to see them actually come in the mail. They sat on my desktop for so long and seeing them actually addressed to me made it all real. We have many fun weddings this summer. I am a sucker for a good wedding, or at least its details, and am looking forward to celebrating young love (though dreading dress shopping . . . I did order one from Zulliy because I thought it was black, but it really was purple and Luke started to sing the Oompa Loompa song when I squeezed into it . . . a giant momma Grimace. Pathetic).

The rest of the week was spent cleaning up my studio at school. I recorded my favorite parts of the room. We have a lot of teachers leaving this year and it made me think about what I would miss if I left too, so I shot this: 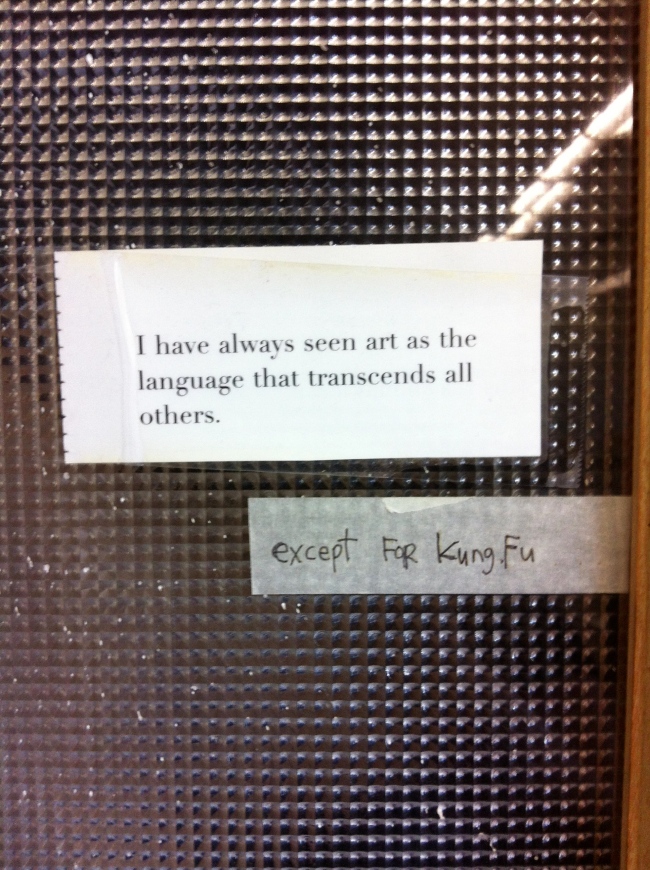 I don’t know who added the Kung Fu line, but I am guessing it was Kim, a bestie who I dearly miss. Each time I open the supply closet I read that and it makes me miss her even more. I stayed at school late one night and made new bulletin boards for Fall. I strung great quotes about art along the walls, including one that I used in my own high school year book that came from A Sketchbook With Voices: “Our heads are round so that our thinking can change direction.” (I was really excited about that quote when I was seventeen until I read Susie’s quote, which was something quirky from Pink Panther and then I just felt dumb).

I also stapled Guy Smiley to the wall. I love that damn muppet and I hope he stays up there, but I am giving it three weeks before he is stolen: 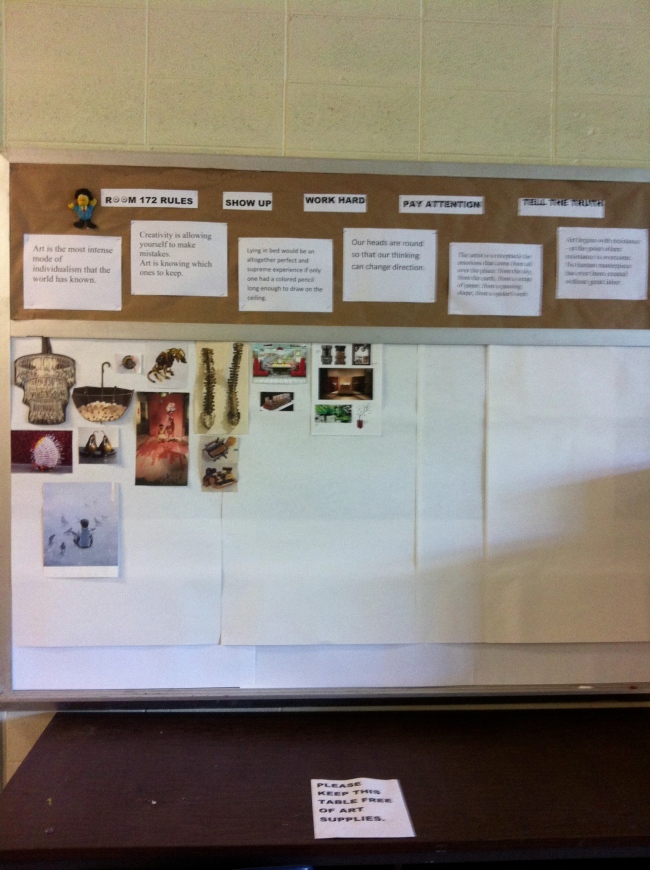 Which brings us to the weekend.

Luke, after getting relatively sick in the studio bathroom before taking a miserable gym exam, took his driving test with the Pee Wee Herman equivalent of Large Marge. If it wasn’t so sad, it would have been funny, an SNL skit in the making. He will take the test again next week. The iPhone feed continues with a screenshot of his testing time and location, which I seriously doubt is worth posting here.

Between a horrible exam week, an emotional week with my students, a chaotic end of the year picnic, concert and all other things final and done, I could not shake the feeling of being crushed with “shoulds” and obligations. I could not even find joy in turning my alarm clock off for summer.

But it IS summer. It’s official. I don’t have to find a sports uniform or matching socks or a lunch box before six AM. I can stay up late and watch bad TV and not worry about Monday. It is the joy of the unpaid vacation of a teacher. Broke, but resting.

However, it seems, there still is a Monday. I saw the calendar on Friday. Orthodontist. Voice lesson. Sand volleyball. (I did mention that she is having a better life than I am right?) Luke needs a ride, William wants friends over. Sean just wants us all to be quiet. So I made a decision.

I decided that this summer I am going to find quiet alone time with my children individually. I want time to inhale them, freeze them in time, without any distractions. The maintenance man at school told me that his young son, who attends MPS, had an all school choir concert last week and not even thirty parents showed up. This made me ache with pity and guilt and in an insane moment of crabby mom, pre-coffee moments, shout at William, “You don’t even know how lucky you are! Your school has to hold TWO concerts just to fit everyone. You DON’T EVEN KNOW!!!”

Sigh. Time to reboot, time to slow down.

Friday night I took Luke to my favorite restaurant in all of creation, Odd Duck. We celebrated a fricking fantastic GPA (in spite of it all) and laughed about his crazy driving tester. Luke loves food the way my dad loves food, with his whole heart. With each new plate, he gushed with approval and delight. He drank six cokes and three cups of espresso and I thought about how the chef at Odd Duck is a former high school classmate of mine and how old we are now . . . so old that my son is older than we were when we met, and I took those black and white photographs of him sleeping on a Pius XI stairwell. This made me nostalgic and kind of frantic so I took lots and lots of photos of Luke enjoying his meal: 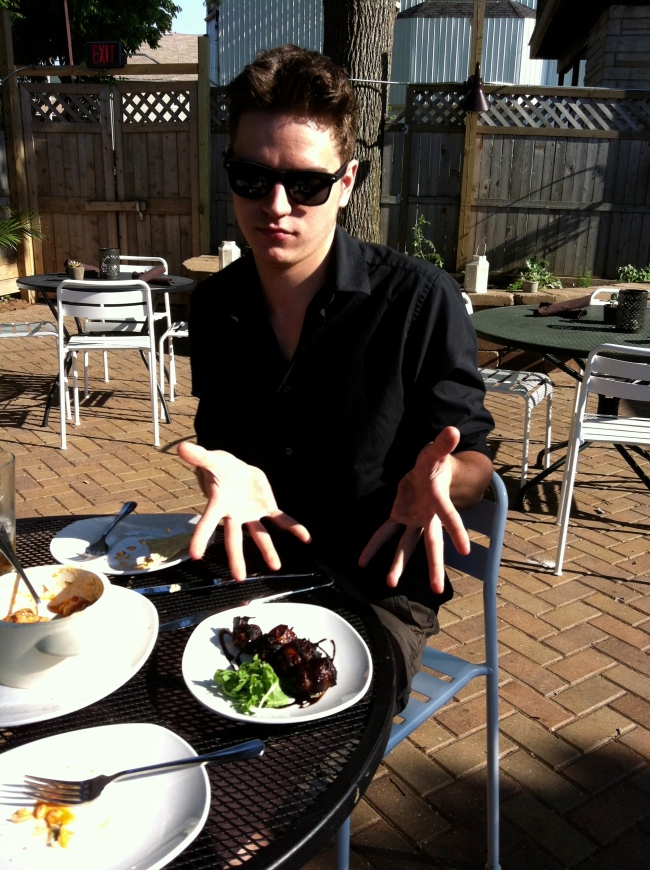 Sean had tickets to the car races at State Fair today. He was impatient with the kids for not being ready fast enough and poor little Quinn raced to put his shoes on and said, “I’m coming Daddy. I am ready,” but Sean had no intention of taking a toddler to the races and the older kids shut the door on Quinn, who looked at me, eyes welled with tears, and silently walked to the couch to watch Calliou for the millionth time (thank, Netflix. Really?).

I nudged my way next to him and said, “You don’t want to go with those guys. They are going somewhere really loud and boring. Stay with me. I will take you to the zoo.”

“Okay, momma. Okay!” He scuttled off the couch and ran to the door. I have only taken him to the zoo once before, on his second birthday. Despite it being really hot and humid outside today and despite the fact that I wore long sleeves and long black pants (because that is what enormous people do), and despite the fact that it is the Saturday before Father’s Day and I knew the zoo would be packed, I got into my car thinking, “It’s only ONE kid. This will be so much fun.”

In spending time with just one child, I have noticed something about myself. Though my children have attended Montessori for eons now, it was not until this Saturday afternoon, that I realized how much Montessori training I have had as a parent. When my first kid went to Montessori I made the grave mistake of carrying his backpack. I was corrected, told to put the bag down, and sternly reminded that we are never to do things for our children that they are capable of doing themselves.

Today, however, more than a decade after that backpack incident, I walked calmly through the crowded zoo, leading Quinn from behind, and watching other parents frantically chase their hordes of children around. If Q did not want to go into a dark aquarium, I did not make him. If he was more interested in the chipmunk eating french fries than he was in the elephant, so be it. If he wanted to ride in the stroller, he rode. If he wanted to walk, he walked. When we got to the train, I said, “This will be fun. We will do this ONE time,” which we did. He would run ahead of me and each time he just got slightly too far, he would turn around, sweaty, and say, “You coming, Momma?” I always answered, “I am coming Quinn.” 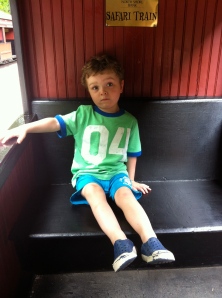 I watched a young mother chase her toddler down a hill, shouting, “No! No running. YOU WILL FALL,” which he did, and then the mother cried and fussed and said over and over again, “Let me see, let me see. I told you that you would get hurt. Oh no, oh no. Are you okay.” She was with a man (a brother, perhaps?) who had his own young toddler tied to a leash and he shook his head at her disapprovingly, tightening his grip on his rope, and I thought about painting a picture of Maria Montessori cutting all child leashes with scissors.

The last thing that Quinn and I did was ride the carousel, which I again, reminded him that we would do once. I paid the money at the ticket booth and let Quinn wander next to me because he noticed a pinecone (just like Calliou did in episode 24). I turned around from the ticket booth and the woman behind me started to scream, “Ma’am. Ma’am. YOU FORGOT YOUR SON!” I looked over, two feet away from me, where Quinn was still busy picking up pinecones, and said, “He’ll follow me. Don’t worry.” She was quite frantic, “Well I was just checking. You could have left him there!” She was clutching her four year old son’s hand  so hard I thought it might fall off. I thanked her and moved to our place in line. As we waited for our turn, I listened to her desperately shout orders at her brood. “No, NO. You cannot go over there. No. We have to wait HERE. Oh, okay. Poppa, you stay here and we will walk over there to pick out our animal.” She literally walked three feet away.

I feel so lucky to have already had that experience . . . that mom who has to do everything just right, who has to hit every landmark at the zoo, who packs a lunch and insists her toddler drink water and not lemonade . . . so lucky that I get to do this again, now, fourteen years after the first one.

We came home, exhausted, hot, and sweaty. We watched Calliou and just started to drift off before all of the others clamored home, bursting in the door with the noise of a thousand bees. Quinn played in his sandbox. Sean, later, gave him a bath (Quinn does not like my baths). He fell asleep next to me by 7:30 and I raced downstairs to try to watch a movie with the older kids. I found Judy Blume’s Tiger Eyes. That book was a favorite of mine when I was Lizzie’s age and I texted her to come and watch it with me” 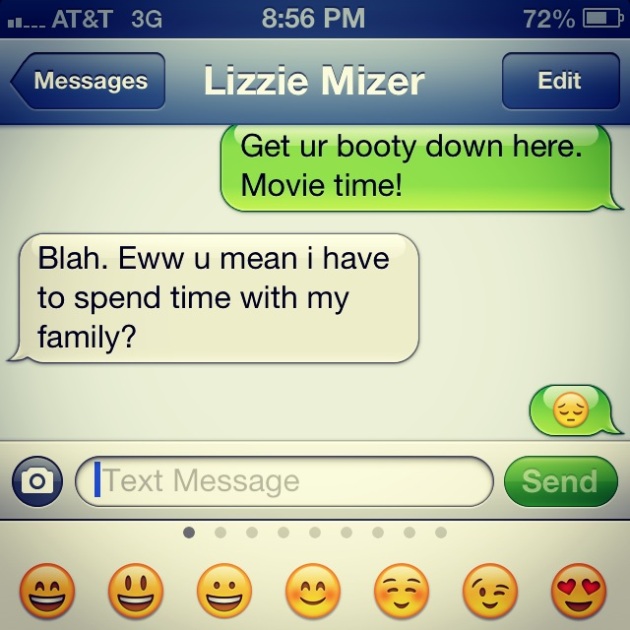 It made me laugh (and I still dragged her to watch with me), but also reinforced how grateful I am to have the patience now that I did not have a decade ago . . . and that I can just soak Quinn up, breathe in his wet bath hair and little baseball pajamas. If I wanted to put a leash on anybody, it wouldn’t be him. It would be the rest of them, as they are leaving me. I imagine tying a very long rope to their hot air balloons one day, watching them soar above me, but knowing where I stand.

2 Responses to Maria Montessori Did Not Use a Leash