Lost, but Bouncing Back

Posted on November 2, 2013 by kellyinrepeat 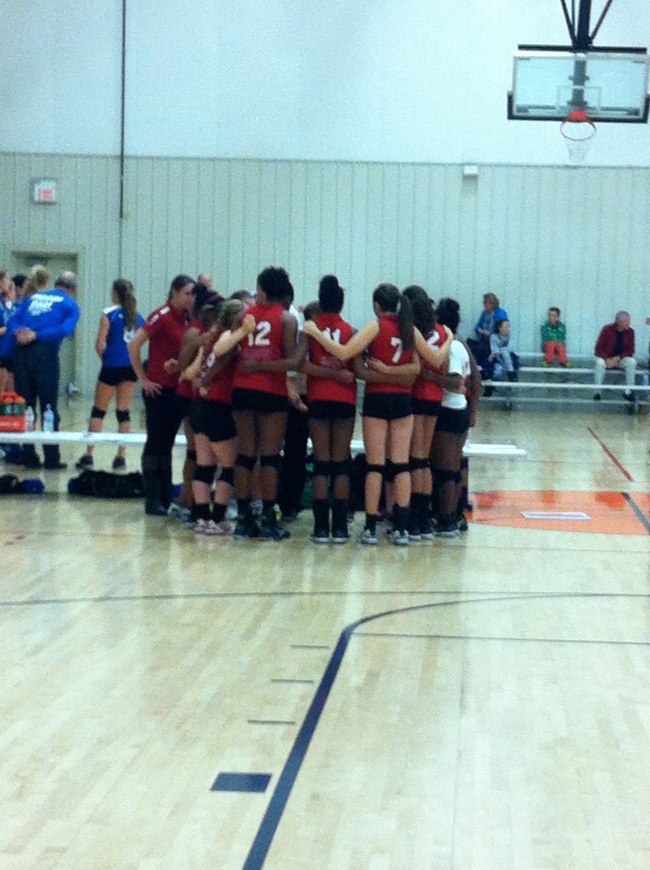 William’s school picture came back. So did Luke’s. We are still waiting for Lizzie’s, but I will tell you right now that no matter what that photo looks like, the image that will forever be burned in my mind from her eighth grade year will be from tonight: dark, raccoon mascara, streaming down her pale, wet face, hair, frizzy with sweat.

They lost the Seton. Seton is the biggest (28 teams) volleyball tournament of the Fall season, and for Lizzie, the very last volleyball game that she will play with the girls she has grown up with, the girls she has played with for four years. They easily won round one last night, but tonight was not in their favor. Seton winners win the best of five games before advancing. Lizzie’s team won the first one . . . a very cool and exciting victory after being down 18-10. They lost the second by four and the third by three. They needed, desperately, to win round four.

I sat, Quinn on my lap, my parents on either side of me, and the noise was so crazy that Quinn buried his sweet little toddler head in my shirt to block out the cowbells and cheers. William and his good friend, Sam, sat on the crowded floor, with spray painted red and white hair, shouting.  Lizzie’s team, down by five came back to tie it up 23-23. We lost the next point 24-23, but it was the final point that broke my heart. It was served deep, likely out,  right past Lizzie, where she reached, with regret, to hit it with one hand, barely grazing it, down to the floor. So yes, the last game of Lizzie’s grade school career was lost with one instinctual reach to the right. After that, knowing they’d lost, Lizzie fell to her knees and collapsed into tears.

Her coach lifted her up, reminded her to lose with empathy, and her teammates, her close friends since the time she was four, huddled around her and squeezed her with all their love. She will never, ever forget that moment. She did not want to go to the restaurant with the team afterwards. She wanted, she said, to go to Grandma’s and cry in her bathtub.

I told her that I understood the pull to do that, but that it might be better to eat and laugh with her friends, to let them lift her up. So we all sat, in a Mexican restaurant in Waukesha, and we let that happen. We let her exhale and rebound while she watched slow motion clips of her kills on someone’s iphone.

Last week, after we won the St. Joe’s tournament, I think all of us believed we could win the Seton. I was so inspired by the St. Joe’s game that I immediately painted about it. I just priced that painting for my show this week, but after tonight, I think it might not be for sale.

I never really played sports. I have never enjoyed watching professional sports. I never went to a game in college, never to a Packer game . . . nor do I have the desire to do so. Watching Lizzie, though . . . I could watch her for a thousand years and never tire. When she missed that last point, maybe I should have felt sad for her, but what I felt was so proud. I think anytime that you get to witness someone you love, fighting with all their heart, that it is a gift.

Later in the evening a bunch of parents went out for shots and while we were gone, Lizzie’s good friend Anna, a non-volleyball player, heard through the texting grapevine, about what happened, so at ten o’clock at night on this cold evening in October, she knocked on our front door and when Lizzie answered, Anna just reached out to hug her and Lizzie sobbed.

I hope that what Lizzie will remember is not that last missed point, but instead, that hug. There will be lots of games, more teams to play on, more life to live, but in that life, there are very few people that will show up on your doorstep and catch you when you are falling. I am thrilled that Lizzie is talented and athletic and smart (and I am ecstatic that we kicked St. Joe’s ass), but what I am most grateful for is that she is loved.

The whole thing makes me just want to start up some adult kickball league or something…just to hear people cheering my name. This has been a hard week for me. After dropping all my work off for the show, I have been having kind of a postpartum depression. Like I gave birth to this work and I have no idea what I am doing or if it is okay and the panic and stress of that doubt has sent me into a spinning and sad place. But tonight, Lizzie showed me what the human spirit is capable of and whether she knows it or not, the pride I feel in watching her live her life fully, restores my own spirit.

2 Responses to Lost, but Bouncing Back