Feeling My Way Through the Darkness

I started to get a cold last Wednesday night. I know exactly when it started because I was super weepy and tired after I dropped Elizabeth off for an 8pm volleyball practice and knew that I had to kill two hours out in the hell of Waukesha before I could drive home. It was -2 degrees, according to my car’s dashboard, the warmest it had been in several days. I drove down dark, icy roads to Target and I bought cold medicine and groceries. As I shopped, I kept sniffling and I could feel my eyes getting smaller with each passing aisle.

The checkout lady told me all about her boyfriend and her boyfriend’s cold and how he lives out in Eagle and she didn’t know whether or not she should try to drive all the way to Eagle after work. She checked out my groceries at a snail’s pace and I really did not feel like talking at all so I just nodded a lot and lifted cheap plastic bags into my cart while she proceeded to tell me which things were in them, “Now that bag, there. It has lots of the non-food items in it, while that other bag has some fragile things in it that might bruise if you are not careful.” I felt like I was in that line for two days. She ended our moment by saying, “That cold you are getting will last for about seven days. It is a bad one. You will feel better for about a day or two and then you will get the worst stomach flu.”

I shuffled my $167 worth of food to my trunk and tried, with bulky mittens, to put the fragile-maybe-they-will-bruise bags at the top of the pile. I got back in my car and let the engine warm a bit. I still had forty-five minutes, but I could barely keep my eyes open. I proceeded to drive down back roads to the gym. The roads, late at night in Waukesha, are  too quiet. I passed Rossetti’s pizza and the fire station, signs for the hospital and as I searched for a gas station, that one Avicii song that comes on the radio all of the time started to play:

This got me thinking about Elizabeth and about all of the time she spends at the gym, all of the hours she invests in volleyball (her butt is like a solid truck tire right now). I thought about the weekend prior where the two of us woke up together at 4AM to drive to Rockford, Illinois so that she could play (and win) her first tournament of the season. On the way there, my stupid GPS rerouted us after the toll booth to side roads that were in scary, farm country with haunted churches and unplowed roads. Together, in pitch blackness, we screamed and giggled as we tried to find a warehouse of a sports complex.

The lyrics reminded me of that drive and of all the drives down lonely roads I make while waiting for her to finish up practice, while there are three other kids to care for (and a husband, who I see on occasion). I don’t know where volleyball will take her or where she will end up or who she will be. I keep asking her things like, “Are you sure this is what you want to do? Maybe you will change your mind once high school starts. Maybe you will really want to focus on singing or writing.” To which she always replies, “Mom. Stop. I know who I am.” My head does not get this love of sports, so I let my beating heart guide me to game after game after game.

I was never an athlete. I was never super popular, whereas Lizzie has had New Year’s Eve plans every year since she was nine. As I drove through the darkness, I wondered, why on earth her little soul would ever choose me to be her mother. Surely, there are much better choices out there for her … mom’s that organize ski trips and slumber parties, mom’s that own sneakers and matching fleece things, mom’s that know how to make that puppy chow snack crap.

I stopped for gas and when I cleaned off the windshield, I took my mittens off and spent a few minutes examining them for frost bite. The lyrics kept chiming in my head, chasing me, trying to remind me of something, it seemed.

At the end of our conversation, as we pulled in the driveway, she said, “Mom. If you never really have anyone to talk to, I will be your friend.”

It was then that I realized I had been listening to the wrong part of the song. I was supposed to hear this part:

Love like crazy, right? Maybe she chose me because she knew I could do that. 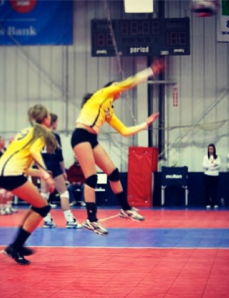 2 Responses to Feeling My Way Through the Darkness