Posted on April 8, 2013 by kellyinrepeat

Today I held my newest cousin, all seven little pounds of him. It is the first time I have held a newborn since Quinn was born and it made me think of all that has happened between then and now and about who I was three years ago, long before my son changed my life permanently.

Though I have provided a link for you to read about my mighty Quinn’s journey, I feel compelled to summarize his story for you here in hopes that there is another mom out there, who possibly just went to her 20 week ultrasound and walked in full of hope and excitement and left terrified, and can be somehow comforted by our experience.

At my 20 week ultrasound, the dates no longer lined up like they had at my 6 week ultrasound. The baby was “much too small.” It’s a long story and I don’t know that the details are important, but Quinn was going to be an IUGR (intrauterine growth restricted). A blood clot had formed behind the placenta and he was not getting what he needed to grow. Every single thing I read about on the internet was dreadful and terrifying and it was at that point I decided the following things:

Still, I was terrified. My friend Martina gave me a meditation to do, which I did religiously and for anyone out there with scary ultrasound news, I strongly recommend you follow suit:

Each night I touched each of my fingers to my thumb, one at a time, and each time they connected, I would sing OUT LOUD (and yes you will feel stupid, but just do it anyway), “You are loved. You are healthy. You are growing.” If thoughts become things, Quinn’s story is proof.

By 25 weeks, my doctors decided to hospitalize me. I had preeclampsia. They were hopeful that I could hold out to 28 weeks, and I was too, but I never made it. It’s important for me to say that because I was determined to make it and it is still something that makes me feel like a failure, and to this day, I get a little nut of a lump in my heart when I see fat, pregnant bellies. Those bellies don’t make me feel envious, but they make me feel ashamed. I am working on this.

I made it to 26 weeks. Sean and Luke were at a KISS concert on September 2nd, Luke’s first concert. They got home around midnight and I called them at about 1AM from the hospital to tell Sean that I thought I had to pee and in fact, thought I was peeing, but when I looked down, I saw a toilet full of blood. My placenta had torn, just a bit from the wall. Throughout the night doctor’s argued about what to do. My ob-gyn wanted to wait, to get me to 28 weeks. He thought I threw up earlier because I had eaten bad chili. My high risk ob-gyn insisted that it was NOT the chili, but that I had HELPP syndrome, that I was dying, and that I needed to deliver right away. She won.

They tried to do a vaginal delivery. Anesthesiologists did not want to give me a spinal because my platelets were so low they thought they would paralyze me. My doctor insisted in case the need for an emergency c-section arose (which it did). Sean had to sign a form that if the needle hit the wrong spot and I became paralyzed that doctors would rush to save my legs and not the baby. Then he was told to wait in the hall.

During his wait, I was told to sit perfectly still. I was a Narnia statue for what seemed like a thousand winters. As soon as the needle was in and working, the rest of my placenta ripped and off for the emergency c-section we went. I puked during the entire procedure. Sean said my insides were every color that existed in nature.

When my doctor pulled Quinn from my stomach and I saw that he was no larger than a hamster, I looked at Sean and said, “That is not good.” Quinn scored a 7 on his Apgar and was wheeled away fast, but slowly enough for me to see through his glass house that he had a deep, deep dimple in his chin. I immediately thought about how Susie’s mom always was telling me that my dimples meant that I had been kissed by angels. Seeing Quinn’s dimple pacified me. I knew he had been kissed. Here he is, moments before I witnessed the dimple. He weighed 480 grams (a single pound): 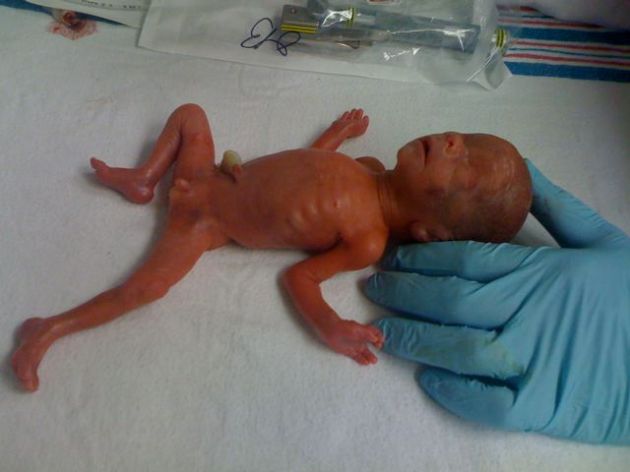 Here is Quinn today, being held by his siblings. 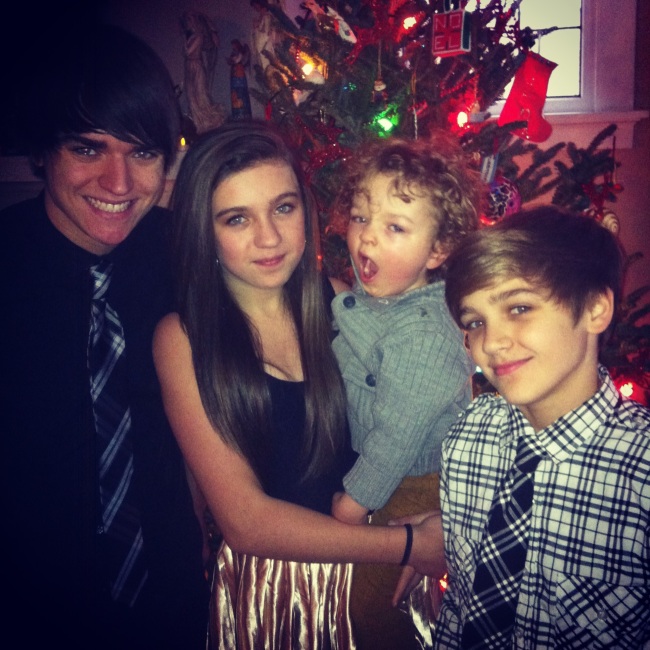 He is the most beautiful, smart, energetic, wonderful boy. His only flaw at the moment is that he prefers to pee on the floor instead of the toilet.

So today when I held the newest member of my family, I sighed, “You are loved. You are healthy. You are growing.” I am pretty sure I will say that to every baby I ever meet. I am also learning to say it to myself.